Looking for a list of the top things to do in Bavaria in summer? Look no further! If you have never thought of Germany as a summer destination but get exited about mountain views and nature, then this post is for you. Bavaria is the perfect place for hiking, cycling, water sports and all things outdoors! Besides, it is home to some of the most beautiful lakes I have ever seen. Read on to find a picture-perfect place with lake, flower fields and mountains all in one!

Top Things To Do In Bavaria In Summer

Germany is, admittedly, not the typical summer destination. And unfortunately also not suitable if you long for the beach, sea and constantly sunny weather.

A summer in Bavaria is perfect for…

How much time should you spend in Bavaria?

Of course, that depends largely on what you want to do and where you come from. A vacation in Bavaria could also be combined super simply with a trip to Austria. I would therefore recommend spending at least a week in Bavaria.

However, you could also spend a whole month in Bavaria, because there is a lot to discover. In addition to incredibly beautiful turquoise lakes, Bavaria has magnificient mountain views, hikes suitable for everyone, and everything in between.

How to get to Bavaria

If you want to combine several destinations in Bavaria, it is definitely recommended to travel by car. Of course, this is only an option if you are from Germany or one of the surrounding countries.

It would be entirely possible to travel by public transport. However, you have the disadvantage that you have little freedom of movement in Bavaria and you might have to rent a car.

Bavaria is huge and the nearest airport might also be in Austria. For the locations I listed here, Munich Airport or Salzburg Airport would be best. However, you might want to rent a car after arrival in order to be able to visit different locations during your stay.

Getting around in Bavaria

Firstly, it’s absolutely doable to explore Bavaria by public transport. However, I would not recommend it, because you have little freedom of movement and cannot use your time optimally. First of all, you have to rely on the fixed bus times, as there is often no train to the lakes. Then of course you also have to wait until you come back to another starting point in order to possibly take the next bus to another location. In sum, it will definitely not be the best experience and that is why I recommend to travel by car or rent a car upon arrival.

Tip: It is often better to reserve the car before arrival. On the one hand, you have less effort with the lessor yourself, because data etc. are already known, and on the other hand, you won’t have the problem that all cars are already rented.

Where to stay in Bavaria?

This guide to the top things to do in Bavaria in summer refers to two destinations in Bavaria: Garmisch-Partenkirchen and Berchtesgadener Land. There are the most beautiful lakes, the best views and an incredible amount to discover. However, it takes two hours by car from Garmisch to Berchtesgaden. Basically, you have two options: a) combine these two and book accommodation in each location or b) divide it into two vacations.

For this guide it’s best to book accommodation in Garmisch-Partenkirchen and in Berchtesgaden.

Top Things To Do in Bavaria in Summer | Garmisch-Partenkirchen

Our first stop will be the city of Garmisch-Partenkirchen, the perfect place to base yourself when exploring the surrounding area. Nearby are: the turquoise Eibsee, the fairytale Neuschwanstein Castle and the enchanting Geroldsee.

Neuschwanstein Castle in Hohenschwangau, Bavaria belongs to the most beautiful castles in Europe. Of course, it has a fairytale history to match its design. Bavarian „Mad King“ Ludwig II built the castle in 1869 to fit a Wagner theme. Apparently, Ludwig II was obsessed with Wagner and the Middle Ages and used the castle to live out his fantasy of life from hundreds of years ago.

However, the setting of Neuschwanstein could not be more idyllic. With beautiful mountains and a breathtaking landscape right behind the castle, you could almost think it wasn’t real.

Tip: If you want to get the most out of your visit at Neuschwanstein Castle, arrive early. This way you have the chance to admire at the castle in peace. It is also advisable to buy tickets in advance, as it can get very crowded, especially in summer. Unfortunately, each person is only allowed in the castle for 35 minutes. The time you spend outside the castle is of course not regulated. So you should definitely take a look at the Marienbrücke, which Ludwig II had built in honor of his mother.

Apparently, Eibsee is the most popular lake in Bavaria. If shining turquoise lakes, fascinating mountain peaks and photo spots is everything you have been dreaming of the past weeks, then Eibsee is the perfect place for you. Lake Eibsee is a popular location for photographers, water sports enthusiasts or simply everyone who loves nature.

There is parking by the lake, however, you should know that the car park does not open until 5 am. So, if you want to get those early morning shots, you have the option to park you car at a nearby street or simply wait until 5 am. In my opinion, the best light for photos is only from 6 am.

You can also rent a paddle board or kayak and explore the lake from the water that’s so clear and shines in bright turquoise when the sun comes out.

Read more about photo spots nearby the Eibsee.

The Eibsee is located directly at the foot of the Zugspitze, the highest mountain in Germany. You can either hike up the mountain in a multi-day hike or take the cable car up. From here, you will have insane views over the valley.

During my visit to Bavaria, I unfortunately didn’t make it to the Zugspitze, but I’m planning it for my next trip. To be honest, I find it even more beautiful to visit the Zugspitze in winter, because then there is snow on top.

Geroldsee is already a very popular photo spot due to its picture-perfect viewpoints. The lake is framed by snow capped mountains, dark green firs and wild flowers which ensure that every picture is a dream.

The Geroldsee, also known as Wagenbrüchsee, is located on the German Alpine Road but you won’t be able to guess this gem from the street. Due to its popularity, it is actually forbidden to go up there. The location is on private property which is why you have to ask before going up! We talked to him during our visit and he was pretty disappointed that so many people simply pull plants out to use in a shooting and then throw them on the floor. Please always be respectful when taking pictures – wherever you are!

The Bavarian Walchensee is also known as the Caribbean of Bavaria. It is one of the largest lakes in Bavaria and popular among photographers and people who love water sports or cycling. Unfortunately, this is one of the spots I wanted to visit so badly during my time in Bavaria and we haven’t made it due to bad weather.

Top Things To Do in Bavaria in Summer | Berchtesgaden

Besides Garmisch-Partenkirchen, Berchtesgaden is a very popular spot in Bavaria. That’s mainly due to the famous Königssee, Maria Gern church and the beautiful surrounding area. Incidentally, it is also not far from Berchtesgaden to Salzburg.

The Königssee is probably the most famous lake in all of Bavaria. It is also one of the largest and cleanest lakes in Germany and attracts hundreds of thousands of visitors every year. When viewed from the north, the Königssee has real fjord character and you might think you are in the middle of Norway.

In addition, the Königssee is largely part of the Berchtesgaden nature reserve, which is why all types of water sports are prohibited. Swimming in the lake, however, is allowed.

The Königssee, unlike the Eibsee, does not offer nice, easy walks from the parking lot. Nevertheless, many visitors come to hike every day. However, you can go for a walk after the boat crossing to Salet or St. Bartholomä. If you want to see both, I recommend to go to Salet first and then visit St. Bartholomä on your way back, because it gets very crowded really fast.

The most popular hike is probably the one to the waterfall at Königssee. This is located on the left side of the lake and has a large natural pool. He is particularly popular with influencers who regularly hold dangerous photoshoots there. I would not recommend the natural pool, because it is officially prohibited on the one hand and legal consequences can arise when posting the photos and on the other hand because it is dangerous.

Unfortunately, in recent years, many people have not complied with the rules, which has led to the prosecution of some influencers and others who have paid with their lives. If you want to read more about this, click here.

Read more about the Königssee.

In addition to the Königssee, the Hintersee in the Berchtesgadener Land is a popular destination. Anyone looking for the ideal image of a romantic mountain lake will find it in Ramsau. Embedded in the magical forest (yes, that’s what it’s called), the idyllic Hintersee offers crystal-clear and emerald-green water as well as dark, mysterious forests.

The Hintersee is also the starting point for numerous hikes and activities.

Maria Gern is a pilgrimage church and due to its unique location one of the most photographed motifs in Germany. There are some motifs with a frontal view of the Watzmann massif. This is what Maria Gern, built in 1680, makes so popular among photographers.

The church, built in 1512, is particularly popular with landscape photographers. The Watzmann massif can be seen directly behind the St. Sebastian parish church making it a beautiful photo motif.

I really hope you liked these top things to do in Bavaria in summer. Here are some more posts you might enjoy:

and get lost with me.

I‘m Tabitha-Maria, 25 years old - born and raised in Cologne, Germany. I'm passionate about traveling, food, and photography. On this blog, I share all my stories, experiences and knowledge with you. Have fun exploring - and reading! See more →

Check out the destinations below

I‘m Tabitha-Maria, 24 years old - born and raised in Cologne, Germany. I'm passionate about traveling, food, and photography. On this blog, I share all my stories, experiences and knowledge with you. Have fun exploring - and reading! 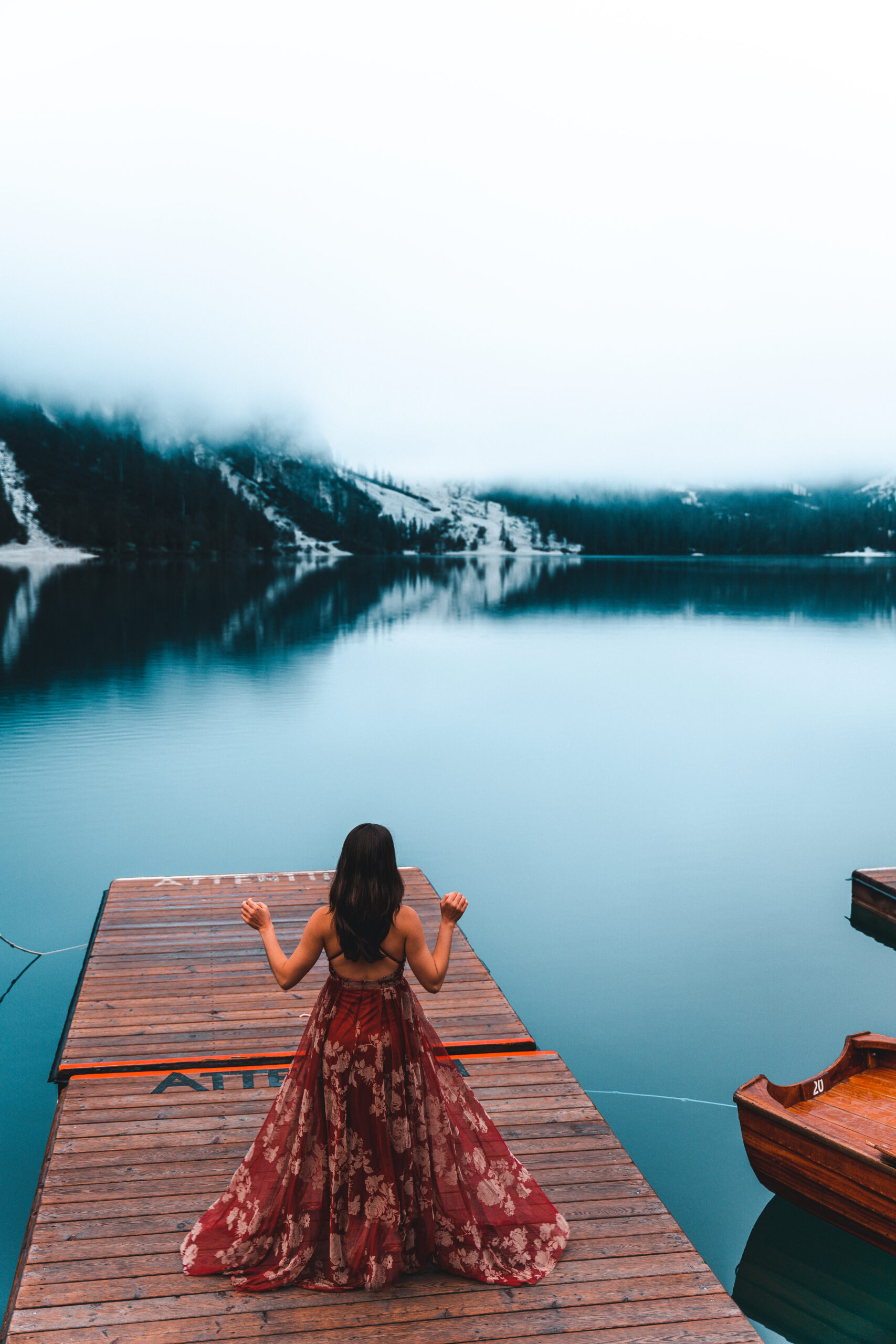